We are a participant in the Amazon Services LLC Associates Program, an affiliate advertising program designed to provide a means for us to earn fees by linking to Amazon.com and affiliated sites. For more information, click here.

I know this one is going to sound crazy, but you know me…I love to try recipes that are a bit outside of the box. This Vegan Coconut Sweet Corn & Blackberry Swirl Ice Cream Recipe did not disappoint! 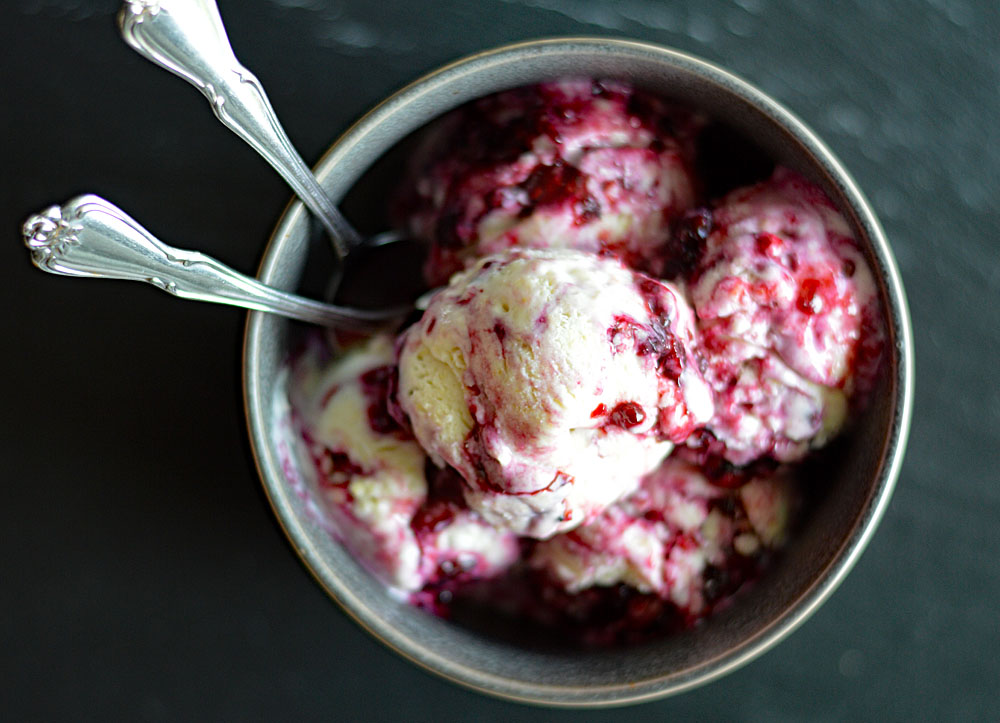 I was researching recipes since corn is in season and found one or two ice creams made with it – but sooo many eggs. That wasn’t going to work. So, I worked to veganize it and I have to tell you, I can’t remember the last time I sampled a recipe so much while preparing it! 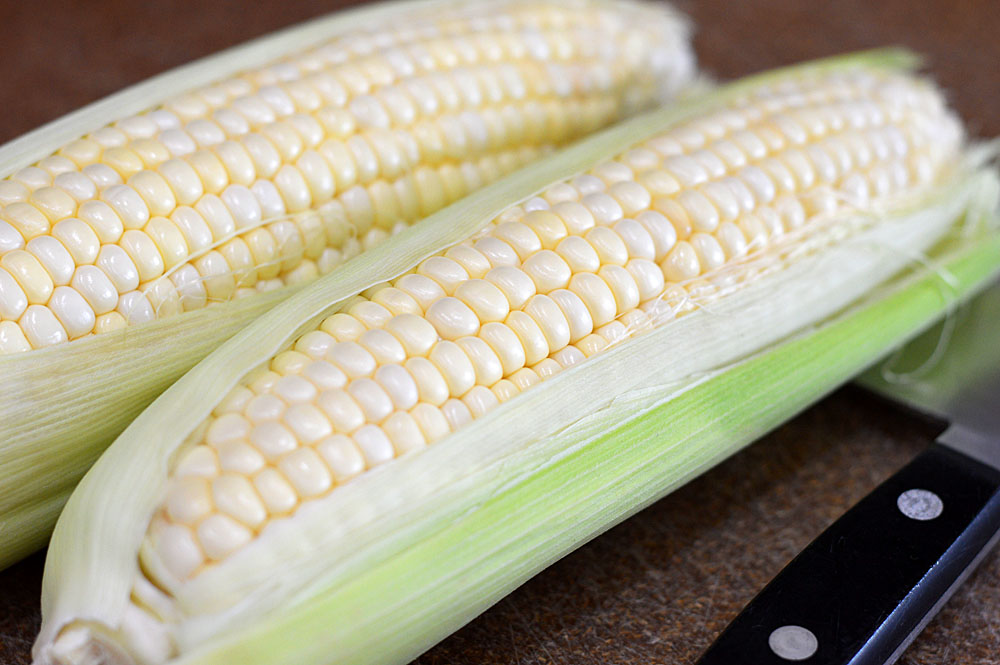 I decided I want to do something a bit different with it and when I found these amazingly beautiful fresh blackberries, I decided to create a reduction with sugar and swirl it into the ice cream. 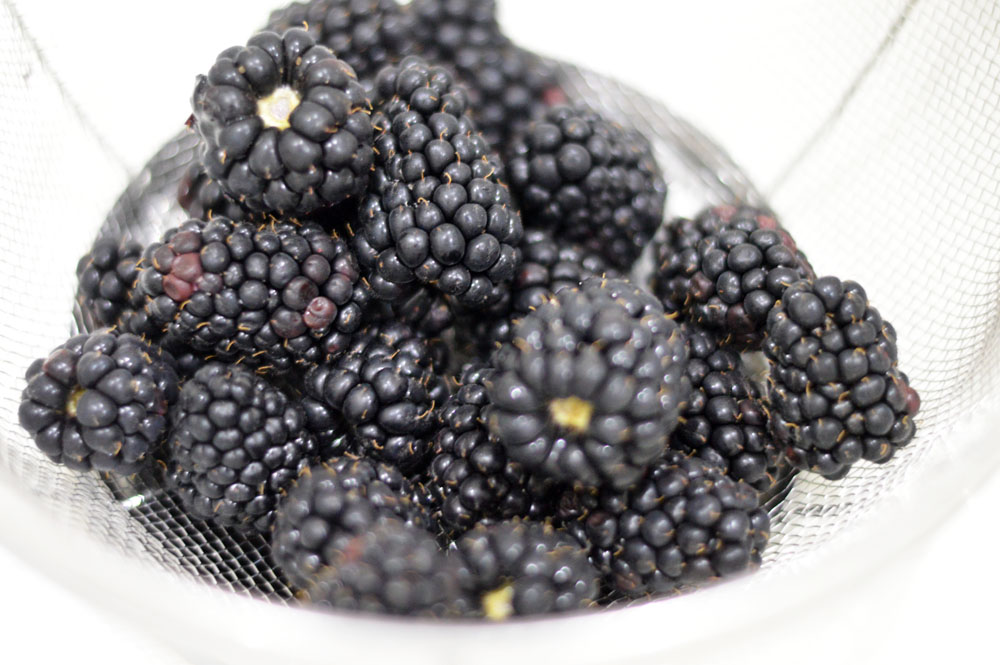 Preparing the corn ice cream base:

The first step is to remove the corn from the cob. I cut mine in half so that it fits easier into our pot.

Be sure to use the back of your knife to scrape those cobs for any additional milk they might produce. That is where the flavor lies! 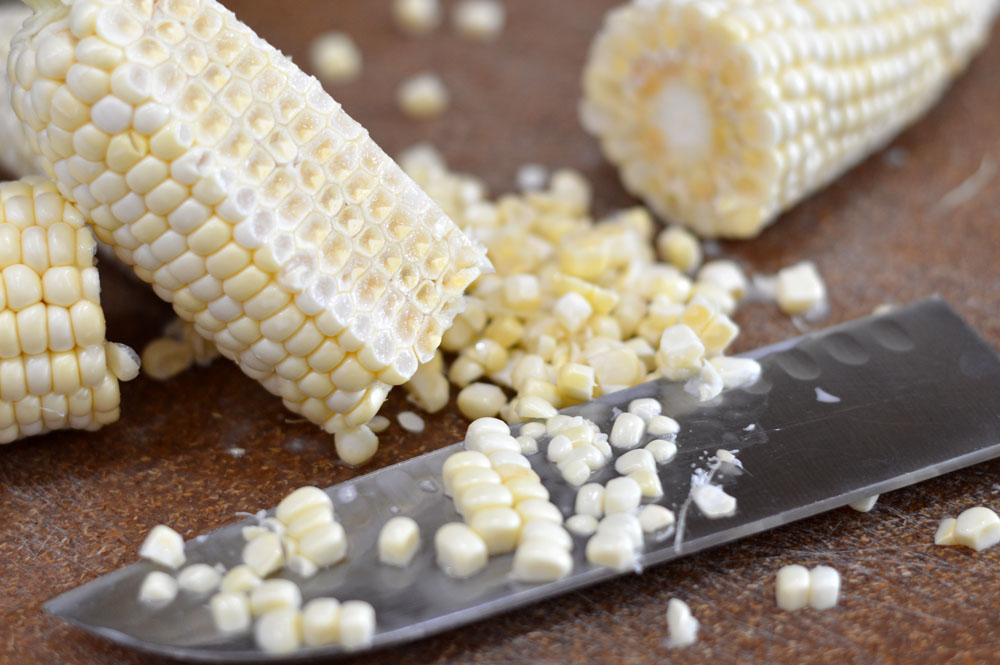 There are two products I used to made this ice cream vegan and both are easy to find on Amazon, Vegan Essentials, etc. Most Whole Foods, Trader Joe’s or similar markets now carry them as well. They are as follows:

These two get added to a large stock pot and whisked together. 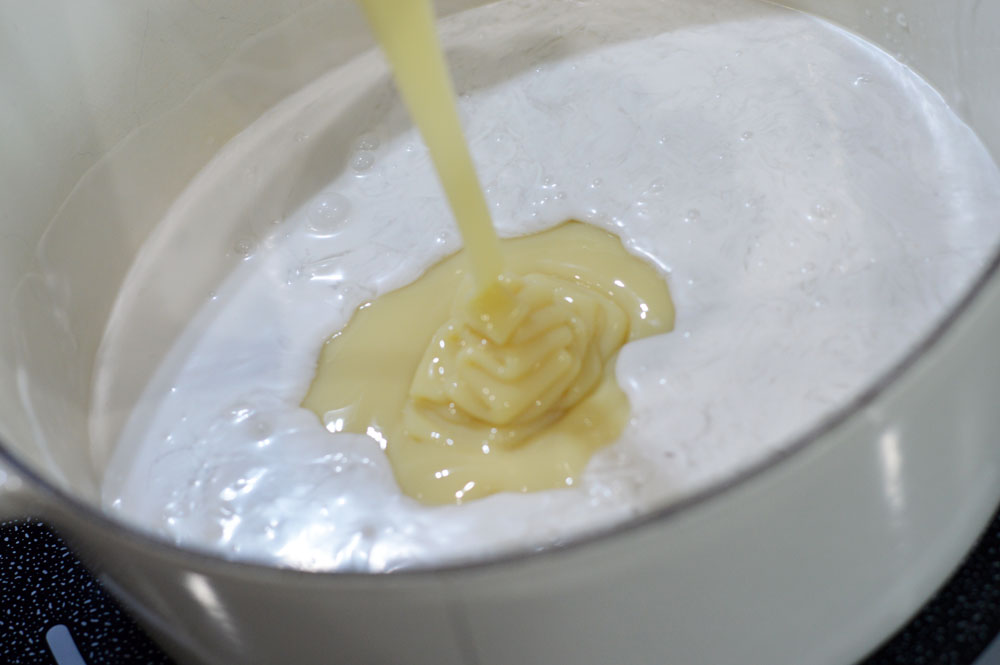 Add the corn you cut from the cob, any milk extracted from it and the cobs themselves. 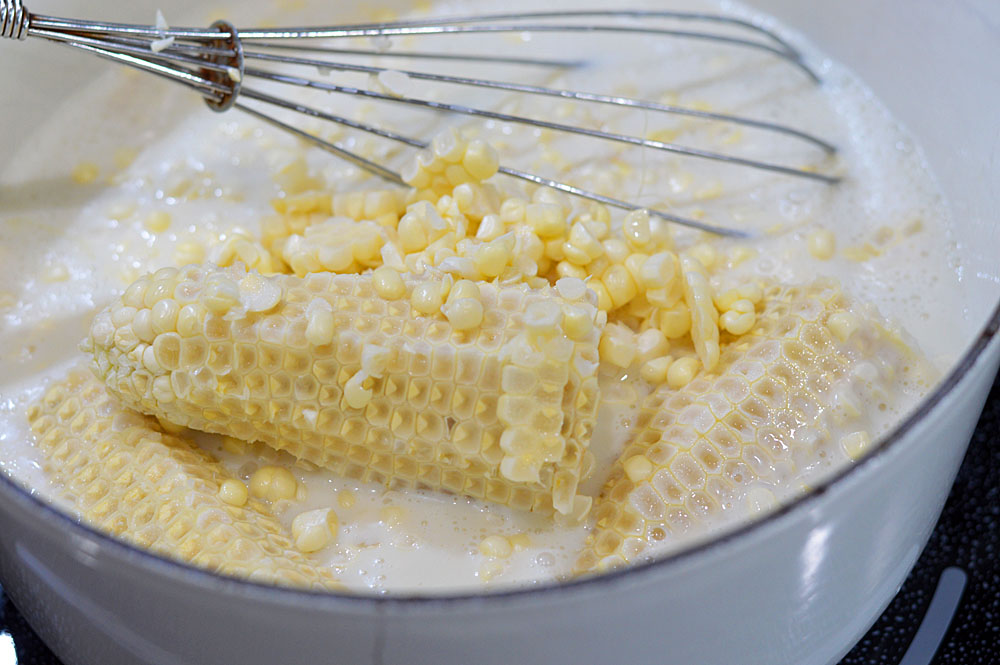 Bring to a boil and then reduce to a simmer for at least 10 minutes. 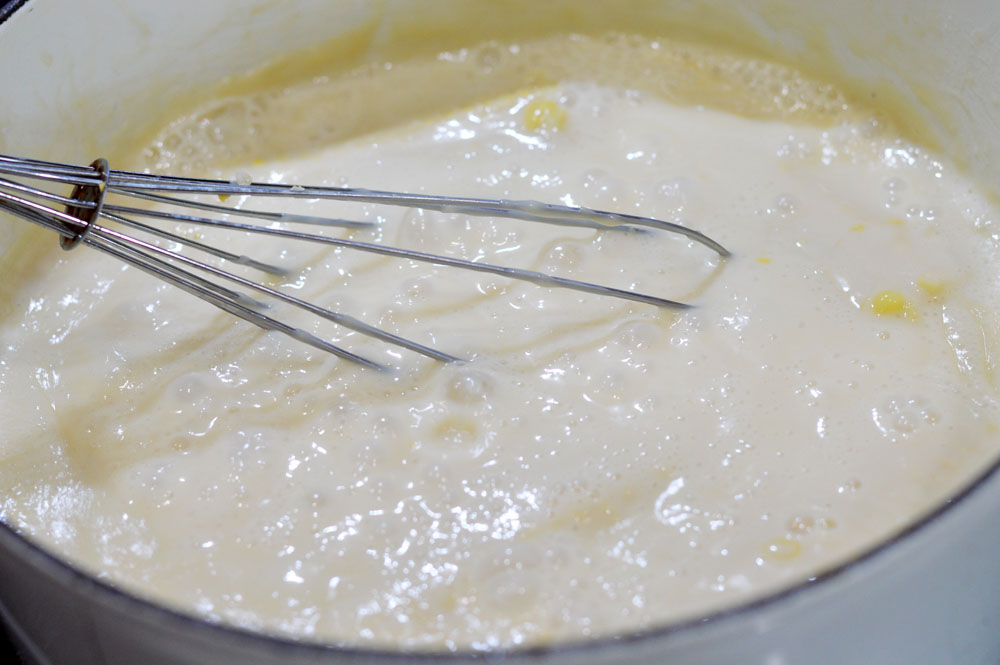 Remove from the heat and add vanilla extract. 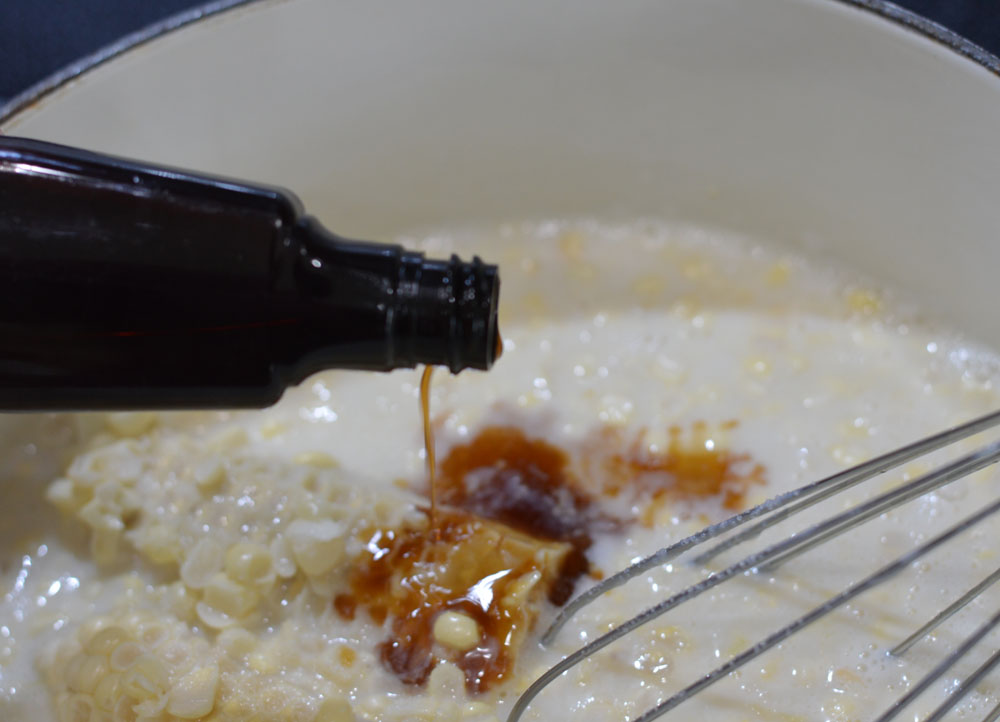 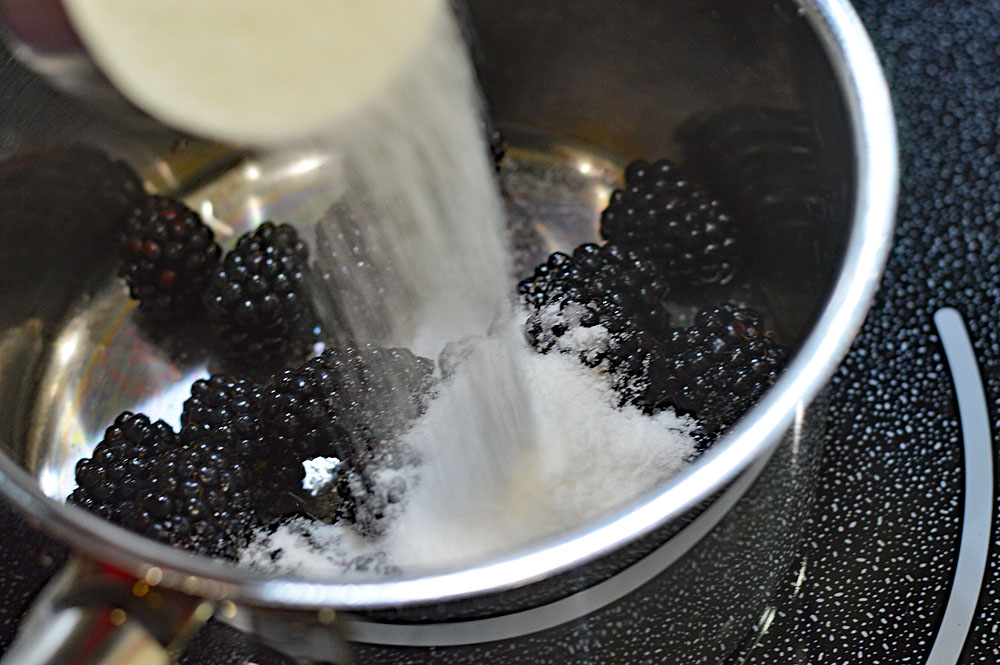 Keep cooking until it gets all bubbly (be careful it doesn’t boil over as it reduces!). Remove from the burner and cool.

OPTIONAL: Before the reduction cools completely and thickens, you can strain it if you prefer a smooth mixture. I did not. 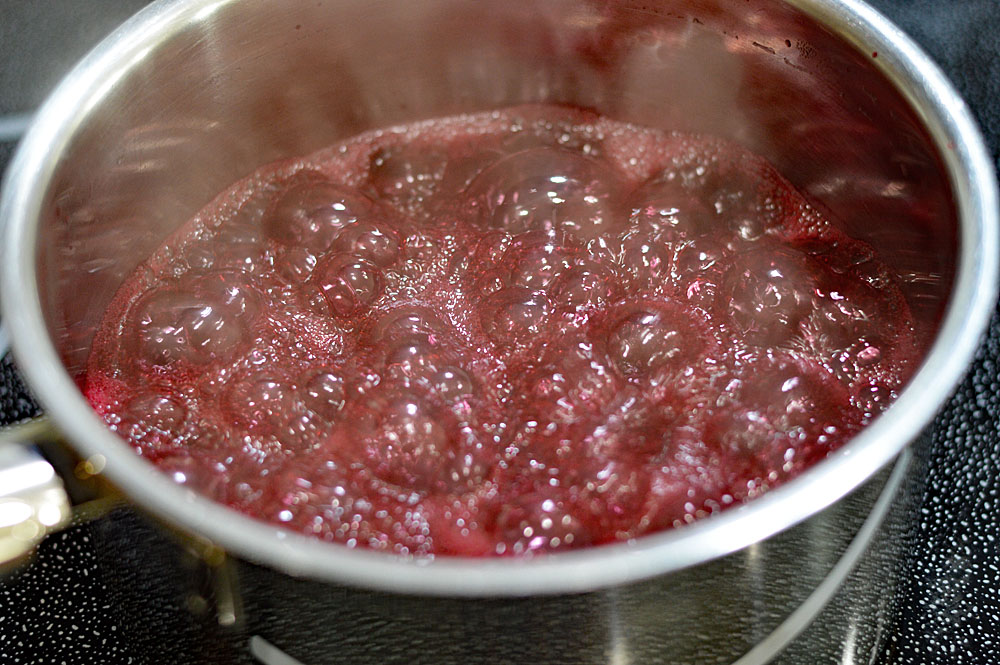 Back to our corn mixture, it’s time to remove and discard the cobs. They have done their job! 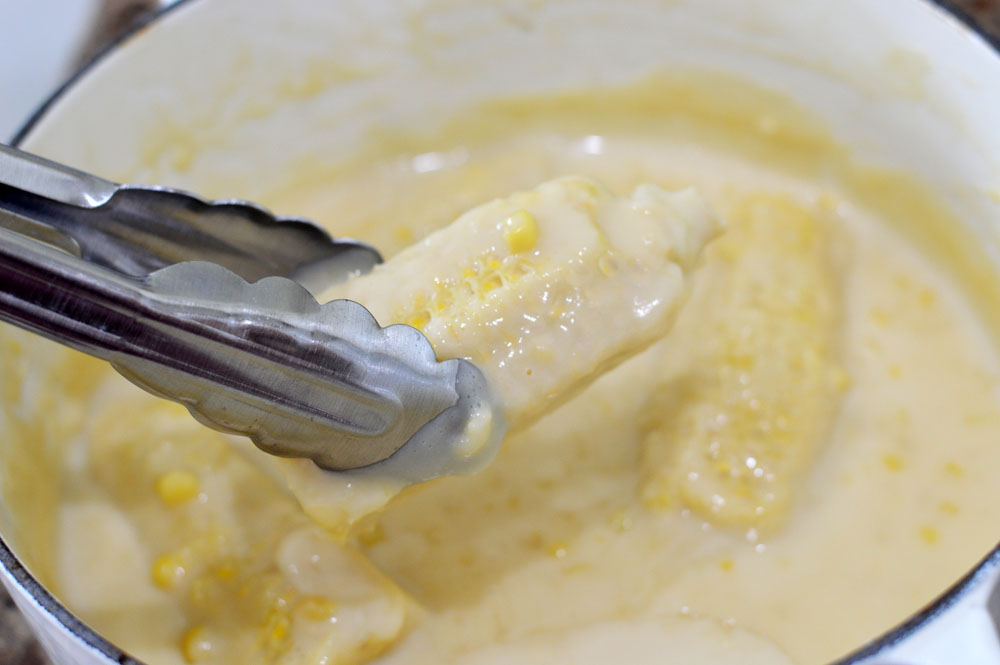 Cool this mixture slightly before adding to a food processor. When you add hot food to a processor, it expands and can burst through the lid. It’s not worth getting burned or making a mess to rush this step.

I get asked a lot about my food processor. I use the Cuisinart Classic {affiliate link} and have had it literally for years! I probably should get a new one, but it’s so reliable. 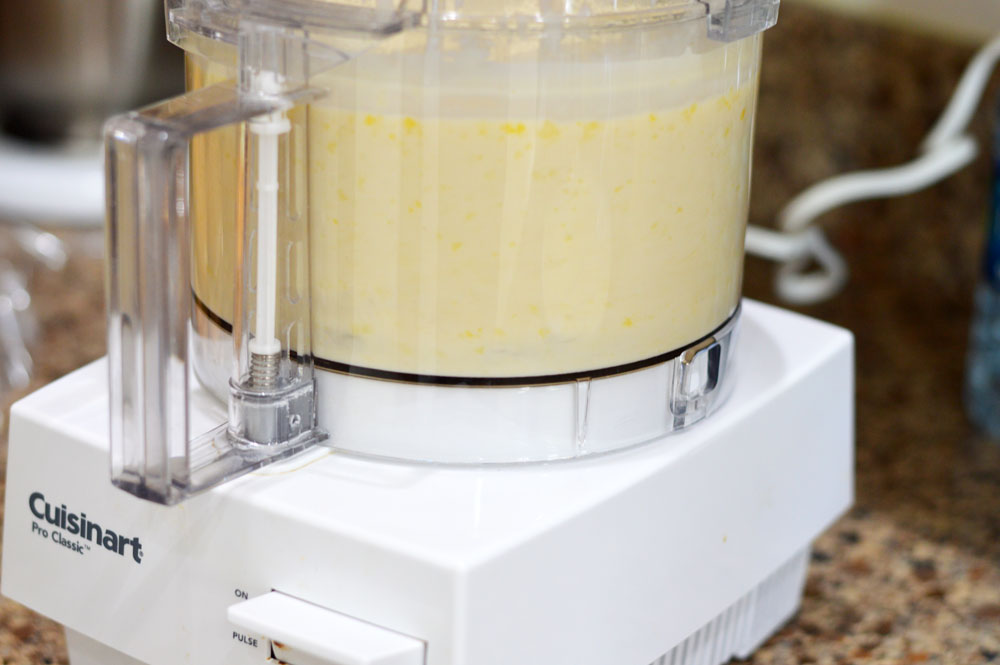 So, now it’s decision making time again. To strain, or not to strain – that is the question. At this point, you will have little pieces of corn that remain in your liquids. If these bother you, just pass it through a fine mesh strainer. Problem solved! 🙂 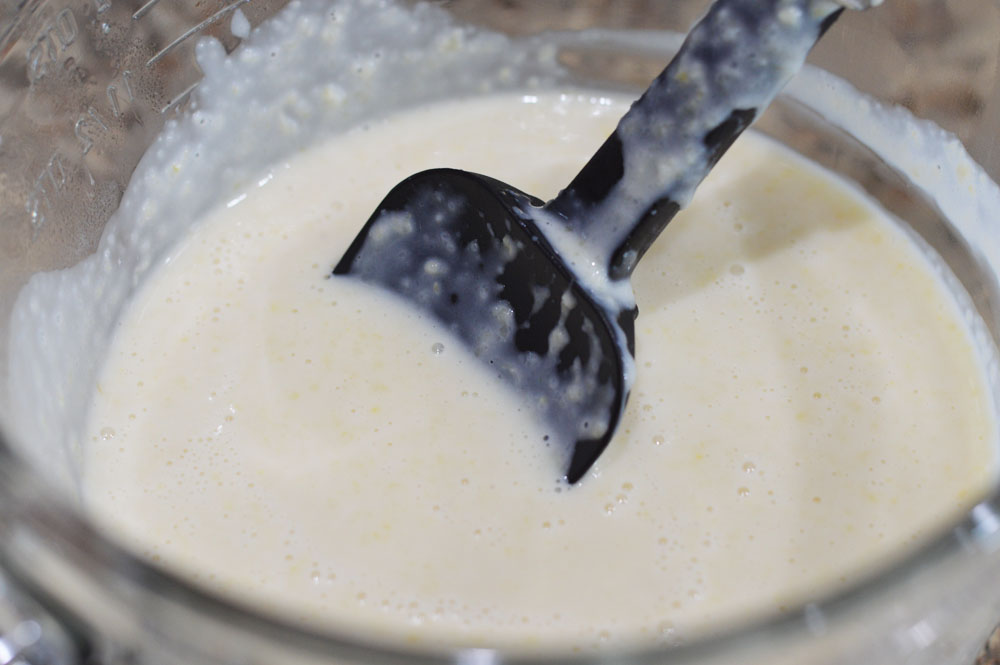 The hardest part of this recipe? Remembering to freeze the ice cream maker bowl the night before!

Can I make this recipe without an ice cream maker?

The short answer is yes! What an ice cream maker does however, is add air as it freezes so that your end product is very light and fluffy. In order to complete the layering process using the berry mixture, you’ll have to freeze this corn milk portion to a soft serve consistency first. It will be just as tasty. 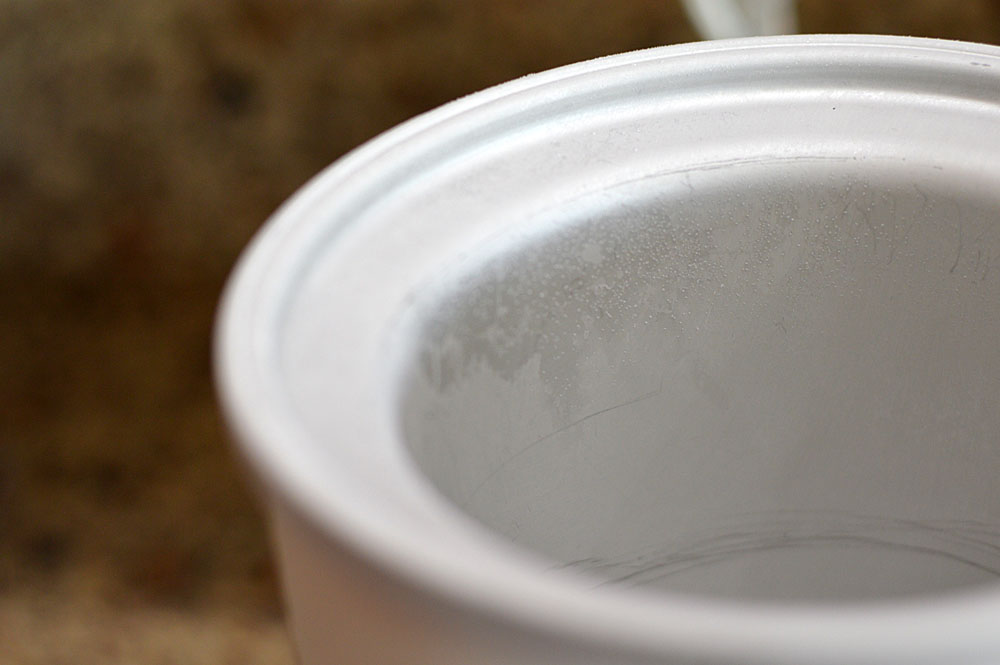 If you are using the pre-frozen ice cream maker bowl, add the corn liquids to it. We want a nice soft-serve ice cream so that we can easily spread and layer it with the berry mixture. This should take approximately 15-20 minutes. 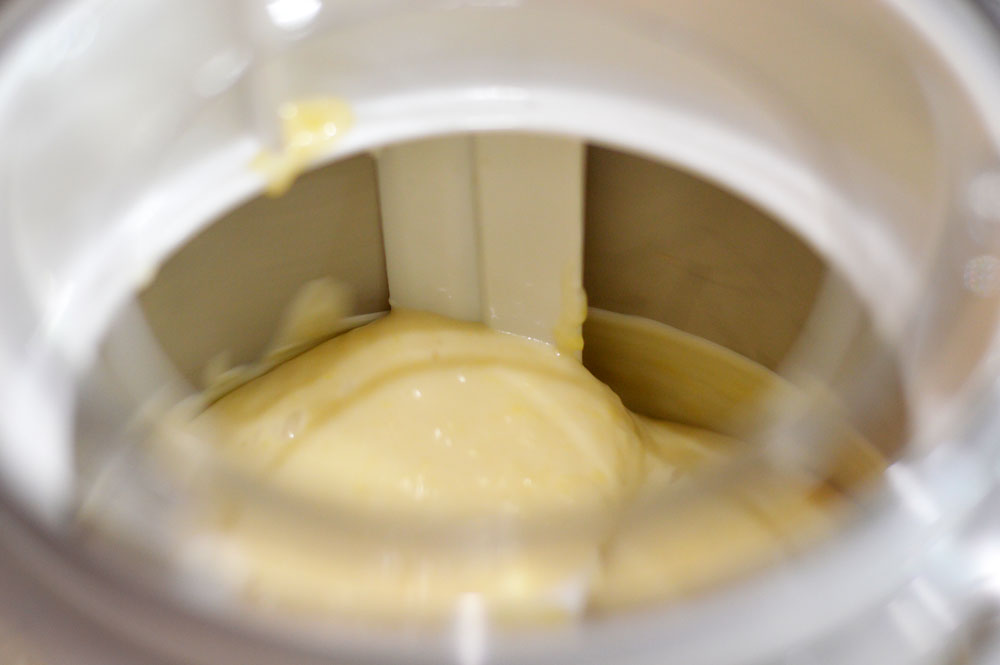 You should see some ice crystals forming and the chunks of your corn that remain (unless you strained yours). 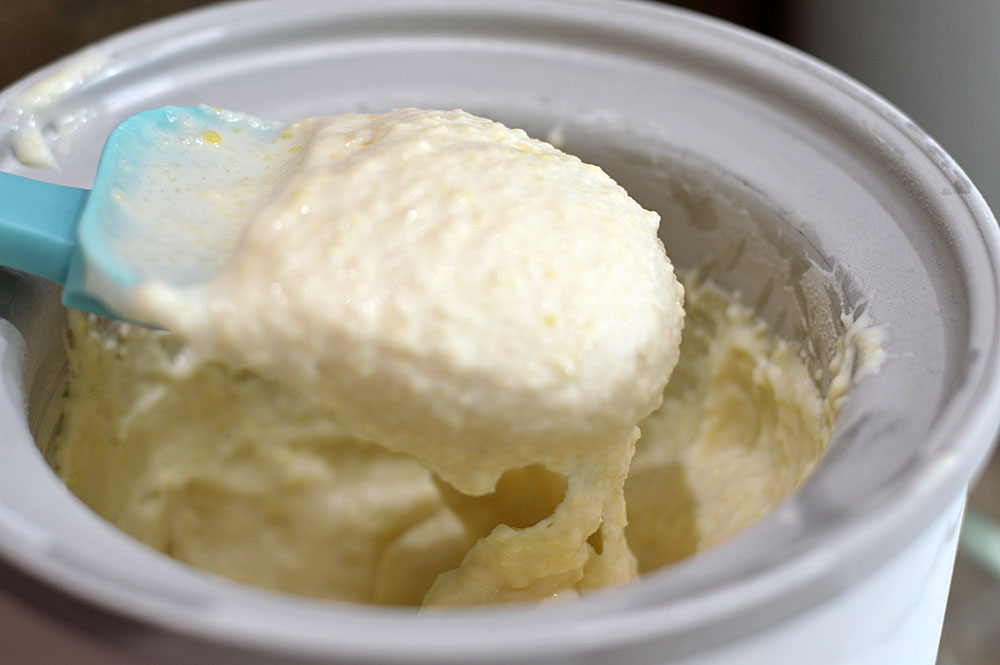 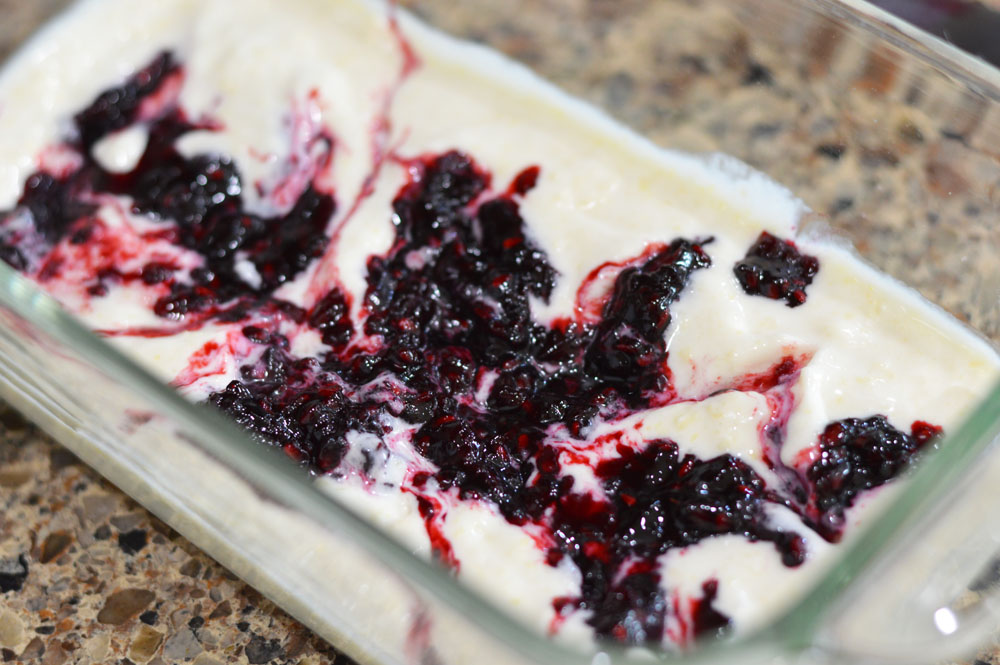 Top with more of the corn ice cream. Spread as evenly as you can, but don’t worry if the berries poke through. This is a swirl ice cream after all 🙂 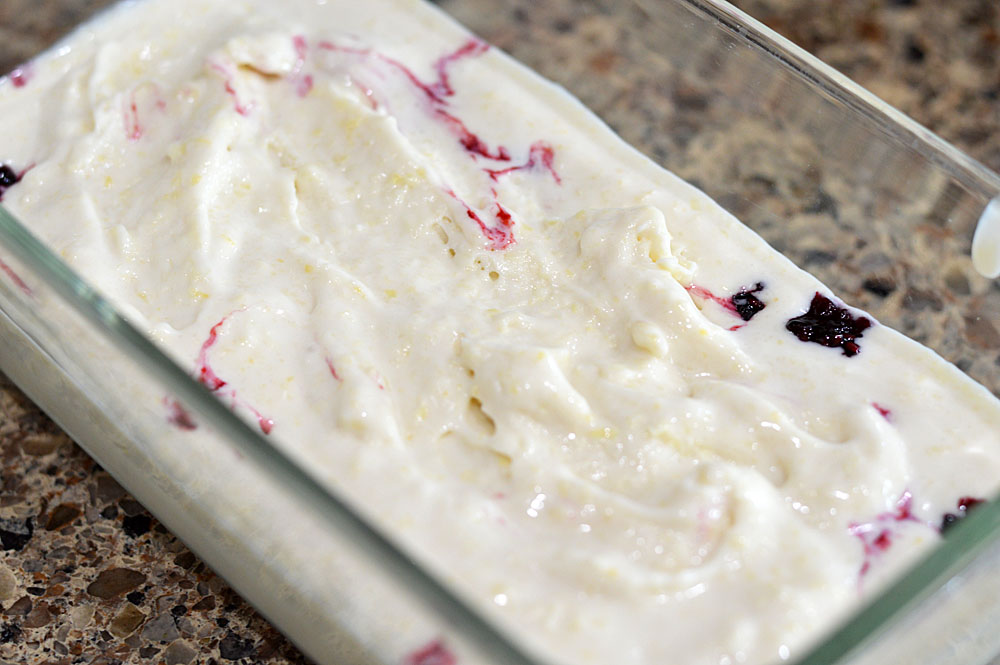 For the top layer, I took a bit more time to run a knife through to create more swirls. It’s back into the freezer for a couple of hours. 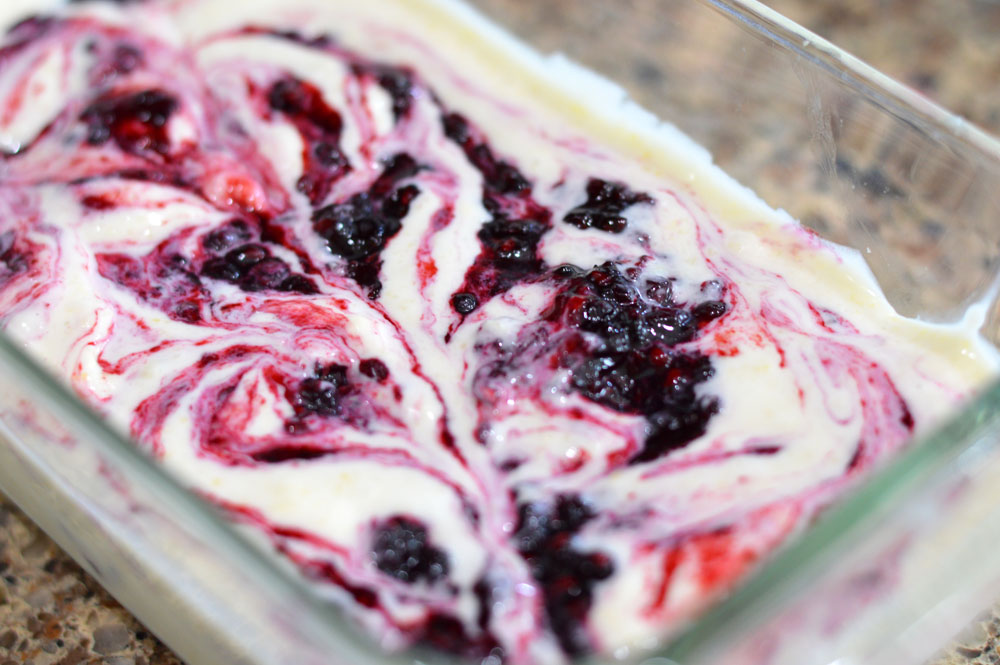 I don’t like this ice cream to get rock hard. It should still be scoopable. If it does get too hard to scoop, just leave it out on the counter for about 15 minutes and you should be fine. Enjoy! 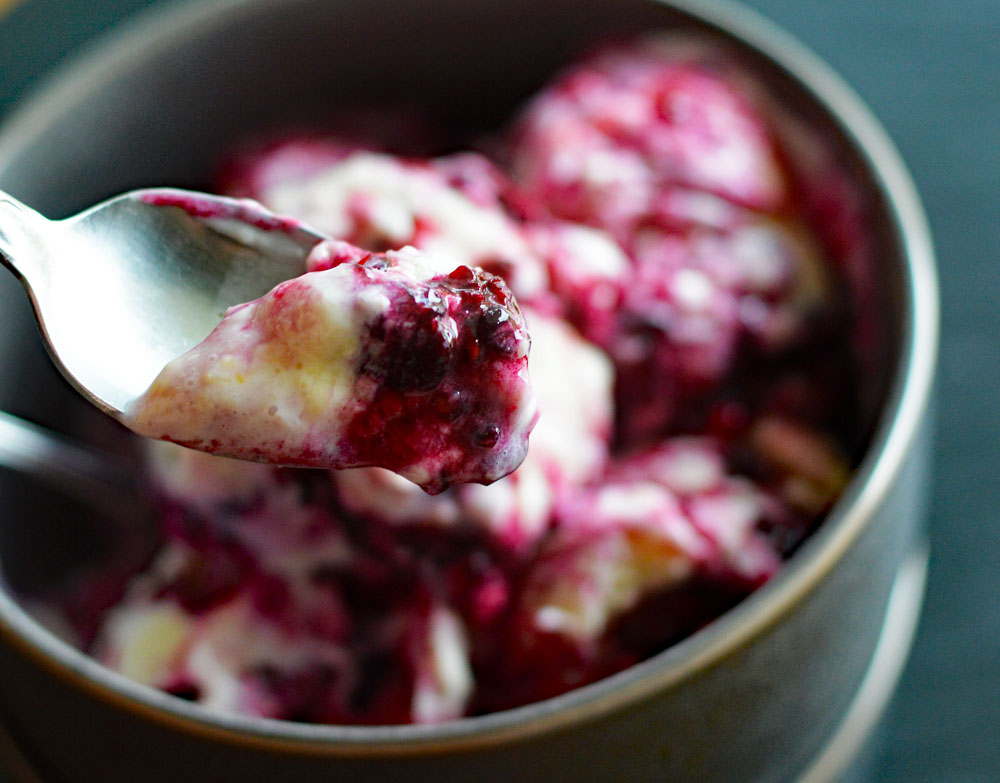 Did you make this recipe for Vegan Coconut Sweet Corn & Blackberry Swirl Ice Cream Recipe? Let me know what you think the comments section below.

And if you enjoyed this recipe for Vegan Coconut Sweet Corn & Blackberry Swirl Ice Cream Recipe, why not PIN IT FOR LATER! 🙂 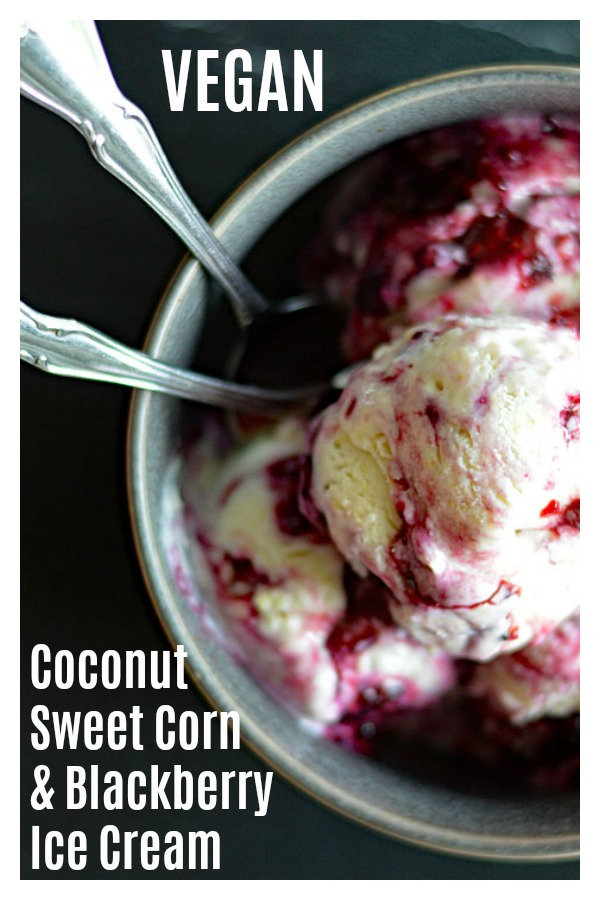 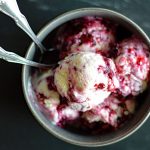 For The Sweet Corn Ice Cream Base:

For The Blackberry Sauce:

To Make The Sweet Corn Ice Cream Base:

To Make The Blackberry Sauce: