This Quinoa Veggie Burger with Pomegranate Molasses has been in my head for awhile now.  It is a veggie burger FULL of flavor.  And…it has a secret ingredient 🙂 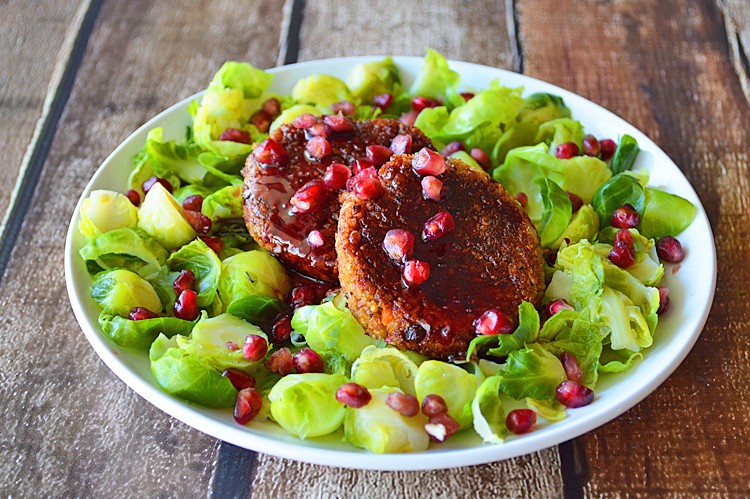 What is the secret ingredient, you ask?  Tater Tots! Yes, they are vegan-friendly.  We cooked them so they had some crisp to them, then broke them up.  The same process could be done with hashbrowns.  Carrots, celery, onion, black beans and quinoa round out the ingredient list.

We made a flax “egg” to act as our binder (instructions below) and added a small amount of bread crumbs.  The nuttiness of the quinoa and that potato flavor really come through.

A few tips.  They are pretty fragile burgers until cooked.  I would process them a little less next time leaving a bit more texture.  In our recipe testing, thinner burgers cooked longer fared much better than those that were thicker and browned more quickly.  Low and slow is best here.  Make sure your tater tots are cooked and your quinoa has no moisture left in it.

Optional glaze:  I saw this recipe for pomegranate molasses on Food Network.  I just had to try it!  Store bought pomegranate juice mixed with a bit of sugar and lemon juice cooked down until it resembles…well, molasses.  It took a good hour, but it was worth it!  It concentrates the flavor and was really delicious on the burger.

We served our burger on a bed of blanched brussels sprouts (some leaves and some we halved) and finally, topped it off with pomegrate seeds. Be sure to season with salt and pepper. 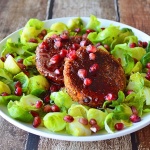