This idea for this recipe was loosely inspired by a deep fried version served at a local Thai restaurant here in Scottsdale, AZ.  Theirs was sliced and deep-fried with a sweet sauce.  I decided to present mine in the “Hasselback” form…that is, a whole sweet potato cut 3/4 of the way through into 1/4″ slices.

For crispier potatoes, you could opt for the traditional Hasselback-style which is cut into 1/8 slices, but I wanted slices you could just pick up with your fingers and dip into that yummy sauce!  Slicing the potato in this form allows more of the surface area exposure to the heat. You get crispy, flavorful edges and a soft interior.  It’s kind of a cross between a baked potato and an oven fry.  And what you can’t see from these photos are the delicious caramelized undersides that occur from the natural sugars present in the potatoes. 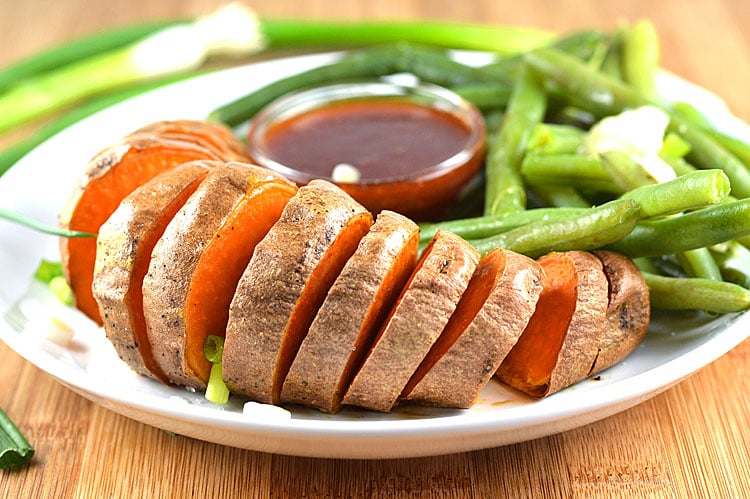 The tangy plum sauce is just the perfect complement to the sweet potato.  I researched a lot of recipes for this sauce to find an easy alternative to bottled plum sauce.  Ultimately, I ended up using a traditional salt-preserved plum sauce readily found in most supermarkets and widely available in Asian markets.  The very first one I picked up was vegan-friendly.

I further enhanced the plum sauce with the addition of lemon juice, brown sugar and salt and warmed over low heat. I always recommend tasting the sauce and adjusting it to your liking.  This recipe made about 1/2 C which doesn’t sound like much, but was plenty for 4 people to use as a dipping sauce. 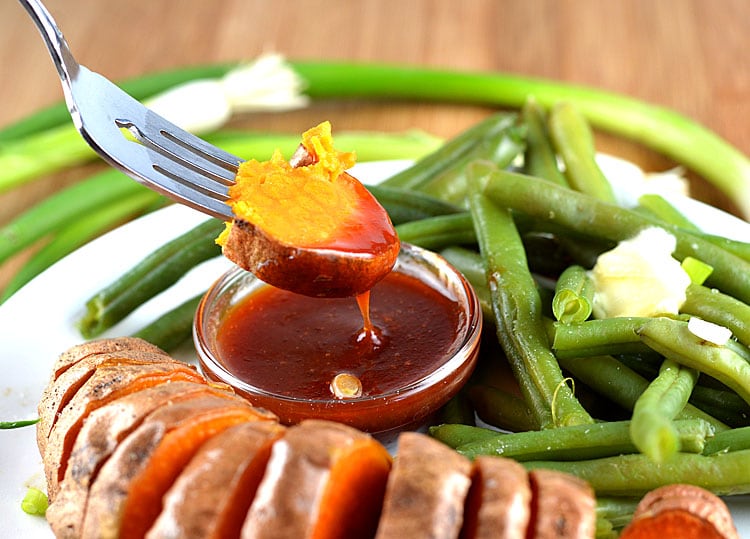 For the potato itself, I made my slices 3/4 of the way through and it helped to have potatoes that were relatively uniform and tapered in shape.  At it’s widest point, these were about 2″ in diameter.  I brushed them with oil and gave a generous sprinkle of sea salt.  After roasting, that salty exterior really added to the flavor.  The potatoes baked at 450 degrees until tender, about 25-30 minutes or so.

I served mine with freshly steamed green beans topped with a dab of vegan margarine, sea salt and black pepper.  It was so good! 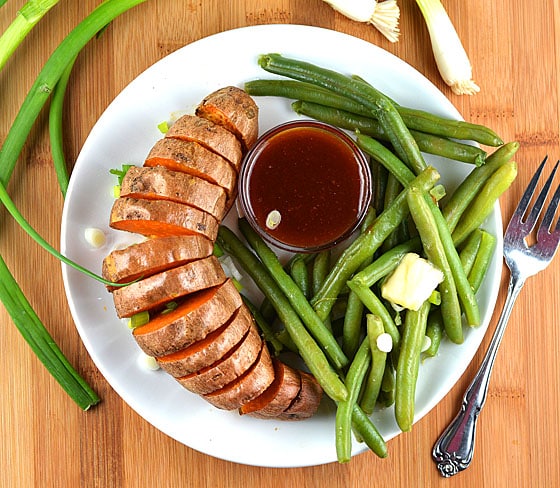 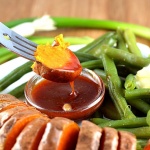