Growing up, I had never even tasted a pierogi. I  know … hard to believe, right?  Then, somewhere in my 20’s I was introduced to these little gems and it was love at first bite!  This Potato Pierogi with Sauteed Cabbage and Apples did not disappoint.

Awhile back, I made these homemade Sweet Potato Pierogi and since I demonstrated the making of the vegan pierogi dough there, I won’t repeat myself.  The filling in this version is beyond simple.  Mashed potatoes, caramelized onions plus a little salt and pepper. 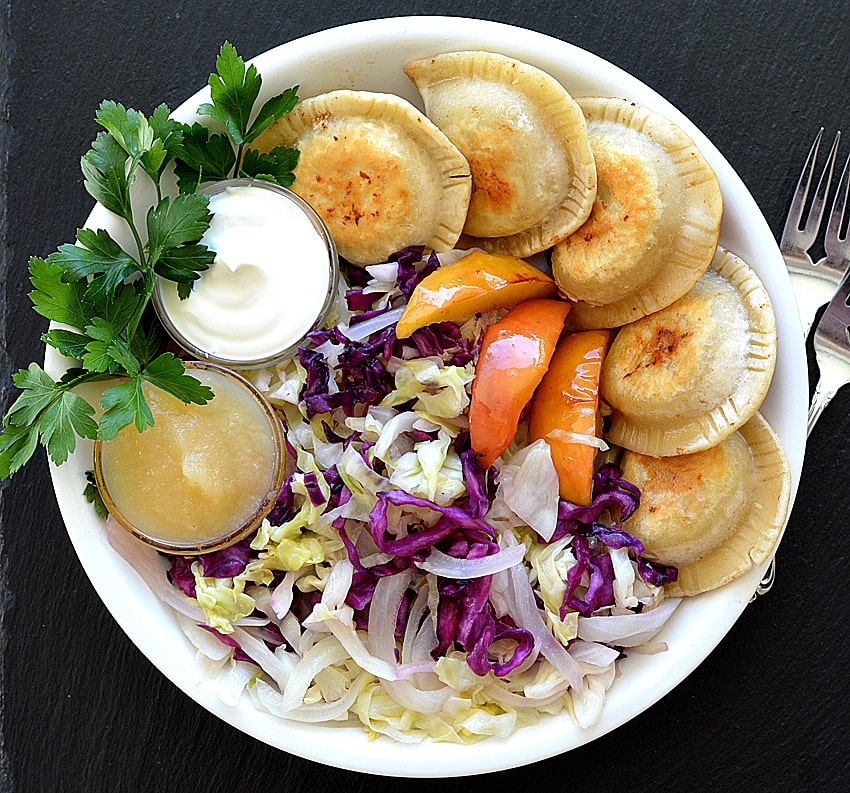 I like to make my mashed potatoes just as I would if I were going to eat them “as is” … and be sure to season them well with salt and pepper.  As with the sweet potato pierogi, take care not to overfill or they will burst open.  Trust me, learned that lesson the hard way!

You just fold over the dough and with a fork, crimp the edges to seal.  This part is important or again, they will burst open when we boil them.  After they are par-boiled (they float to the top when they are ready), they go into a skillet that contains a bit of oil or vegan margarine over medium heat.  I actually use both, one for flavor, one for browning.  I find that if I just use vegan margarine, it burns but with a touch of oil, I am able to get better color on them.

In another larger skillet over medium heat, add the onions and again, a touch of both oil and vegan margarine.  Very little is required to get this going.  I season with salt and pepper along with a splash of apple cider vinegar.  You’ll notice I did the onions and green cabbage together, but did the red cabbage separately.  If you do them together, they will taste just fine – but it will turn everything pink.  Not a bad thing…if you like pink 🙂 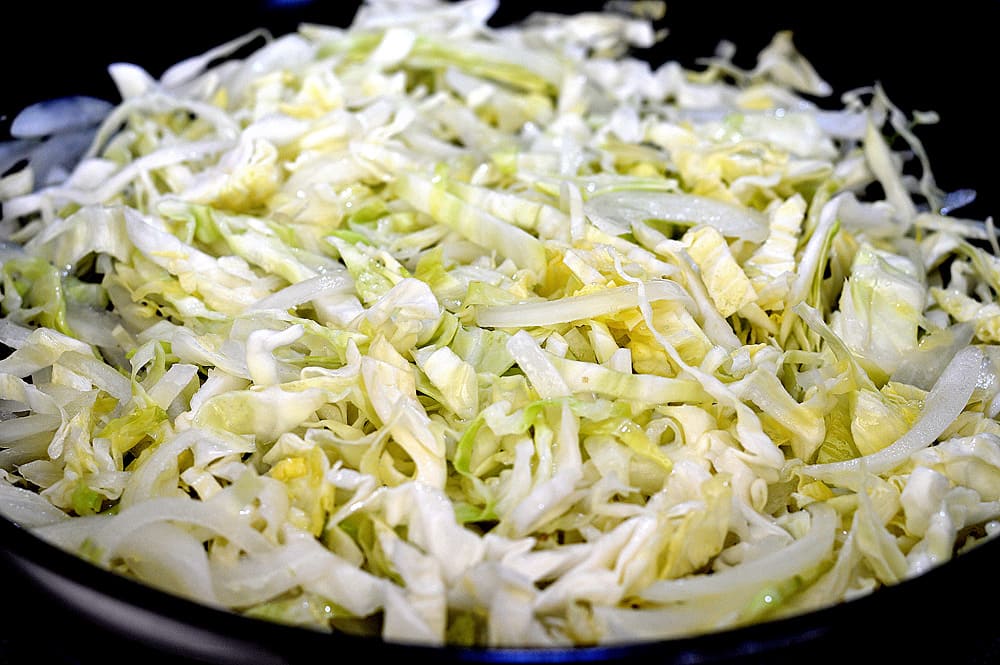 Just before serving, I clean out one of the skillets and add a smidge (technical term) of vegan margarine and the sliced apples over medium heat.  In just a few minutes they get golden and tender.  Apples, onions and cabbage are a match made in Heaven. 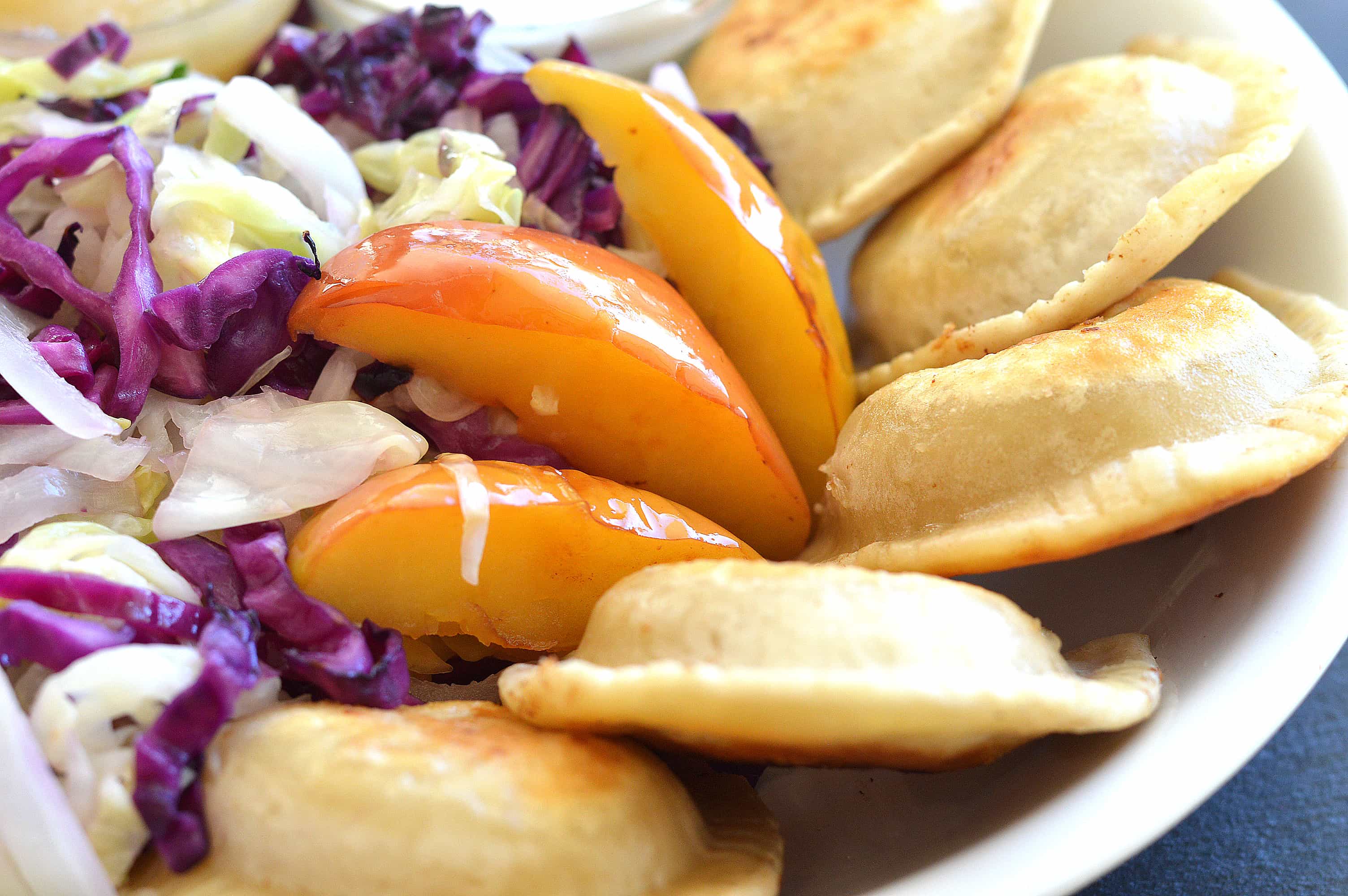 I like to serve mine with both vegan sour cream and applesauce for dipping.  Sweet + savory = my favorite kind of meal!

Did you make this recipe for Potato Pierogi with Sauteed Cabbage and Apples?  Let me know in the comments section below what you thought 🙂 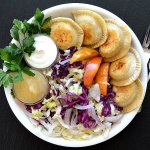 FOR THE PIEROGI DOUGH: