I’m excited to introduce you to a new series I’ll be doing here on The Veg Life! called “Vegan On A Budget”.  So many times I see comments around the web about how expensive it is to be vegan.  And unfortunately, many are living on very fixed income forced to feed their families less than ideal meals.  This series attempts to show you how to shop smart & eat healthy on a budget.  Even if you aren’t on a fixed income, I think you’ll find the data informative and the recipes appealing.

Some of the posts will include: “Building a Vegan Pantry”, taking the “SNAP (food stamp) Challenge”, “Grocery Hauls” and “What I Eat In a Day”.

“Vegan On A Budget” will be a comprehensive multi-part series when the new and improved TheVegLife.com premieres late summer/early fall, but I wanted to start giving you a sneak peak at what’s to come!

So let’s get started with our first dish.  This is White Bean Fettuccine Alfredo with Broccoli and Garlic Bread.  A complete meal packed full of protein. You see, as the name implies, this alfredo is made from Great Northern Beans! Similar in it’s preparation to our Cauliflower Alfredo, this sauce is very smooth and creamy.  The beans are very, very mild in taste and take on the other flavors we’ll be adding later. 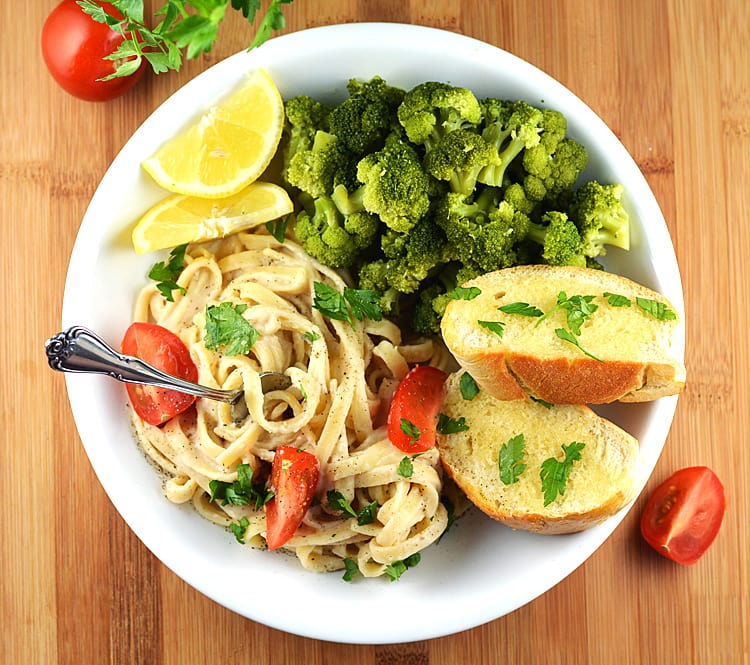 Most of the recipes in this series are meant to feed two people.  However, this sauce will easily feed four.  You’ll just need to increase the pasta and broccoli to do so.  You could also opt to make less sauce using one can of beans and to stretch it a bit, use slightly more almond milk.  Be sure to taste for seasoning if you do adjust the recipe.

Here’s how it breaks down cost-wise.  I’m including how much it cost me to purchase each item and the size I was able to get for that price as a form of reference.  Obviously, not all areas of the country (or world) will be priced similarly. Some of your grocery items may be more (or less) than I was able to find them.  That being said, this recipe in it’s entirety, serves two people for just under $5.00!  We assume you’ll already have the very basics for your pantry such as salt, pepper, etc. 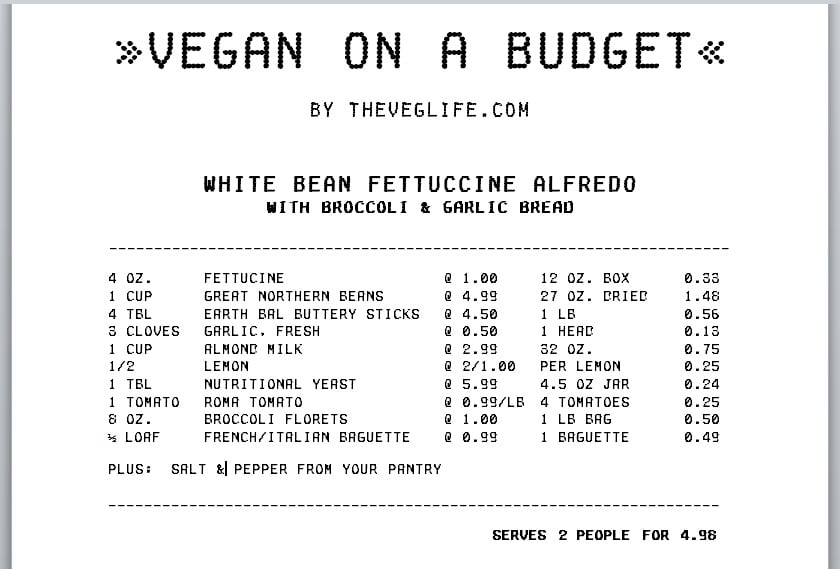 To begin, drain and rinse two 15 oz. cans of Great Northern Beans or soak 1 C of dried beans overnight, drain and rinse.  Dried beans are almost always less expensive, especially since you can buy in bulk which will make your budget go that much further.

Place the beans into a food processor.  Add melted and garlic-infused vegan margarine to the beans.  Additionally, add the lemon juice, almond milk and nutritional yeast.   If you are unfamiliar with nutritional yeast, you can read my blog post here.  It provides a nutty, “cheesy” flavor and wealth of vitamins, minerals and protein.  Speaking of protein, this recipe boasts nearly 21 grams per serving!

Process the beans until you achieve a smooth, creamy sauce.  Taste and adjust for seasoning. 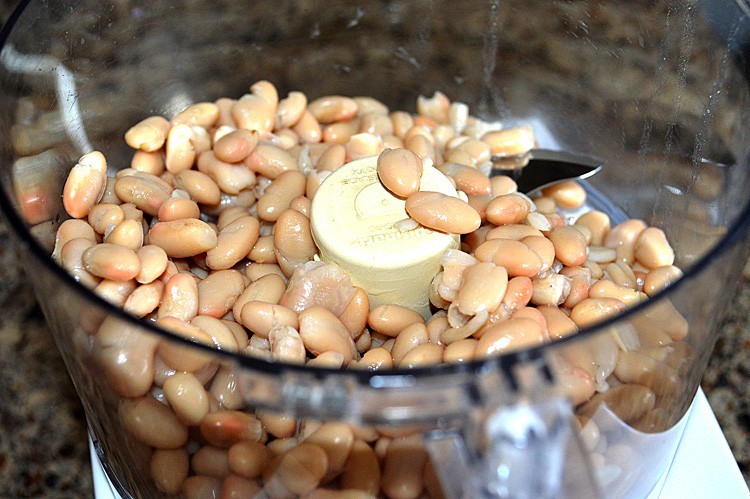 Transfer the sauce to a large saute pan to heat through.  If it seems too thick, add a bit more almond milk. 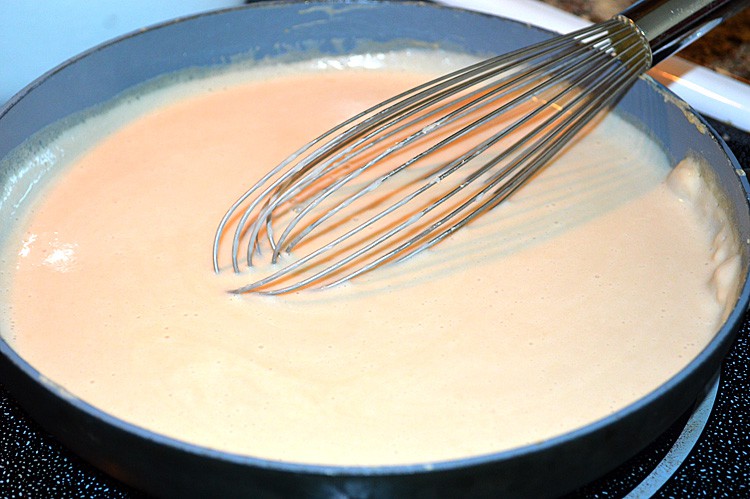 So let’s get that fettuccine cooking!  Pasta is one of those foods that is quite inexpensive.  At my local store, we can almost always find pasta for $1.00 per box.  Dollar stores are another alternative for these items. 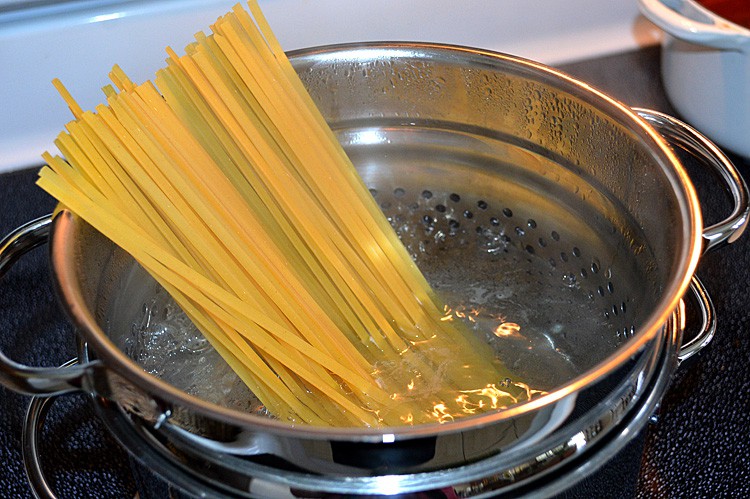 The sauce will thicken as the starches from the pasta seep into it, so combine just prior to serving. 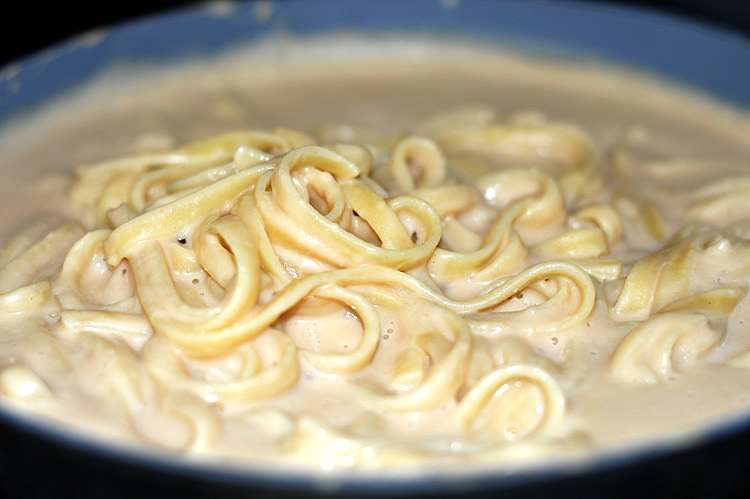 We found frozen broccoli for $1.00 per 1 pound bag as well as .99 french bread still warm from the grocery store bakery.  We’ll also be posting a recipe for french bread so that you can make your own.  There are savings to be found in making your own bread.  Though it isn’t difficult, it may seem a bit too time consuming for some.

Another area of savings is in growing your own herbs.  From my local Home Depot, I was able to buy several plants at $2.00 each.  From these, I can get a continual supply of fresh parsley, thyme, green and purple basil, oregano and mint.  If you live in an area where you can garden, you can save even more on some of your produce.  Here in Arizona, I patio garden.  It gets too hot, so the herbs come inside during the summer months.

We served the pasta with fresh tomatoes and steamed broccoli florets.  A few wedges of lemon and a sprinkle of parsley round out the dish.  At just $2.49 per person, this makes a hearty and nutritious meal. 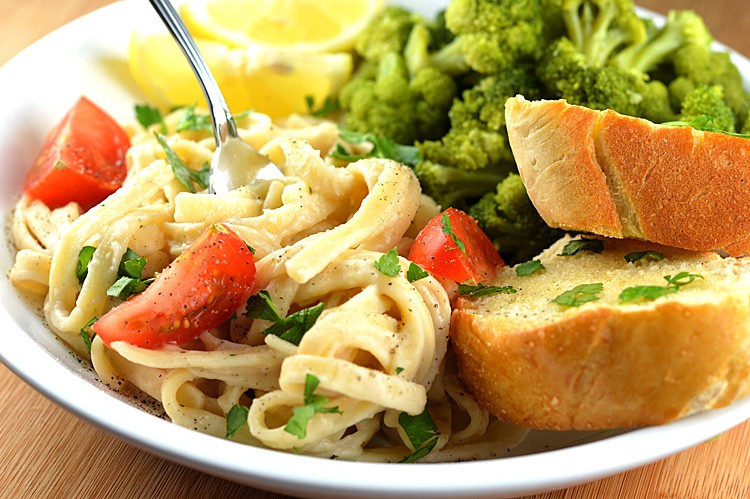 The full meal, including broccoli and two slices of french bread come in at just under 500 calories per serving.  Check out that protein, nearly 21 grams! 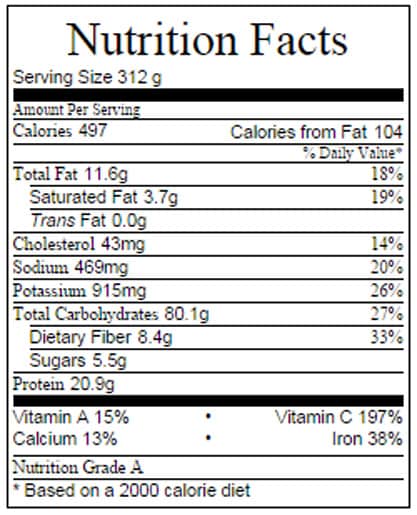 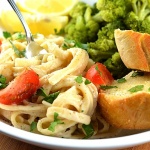